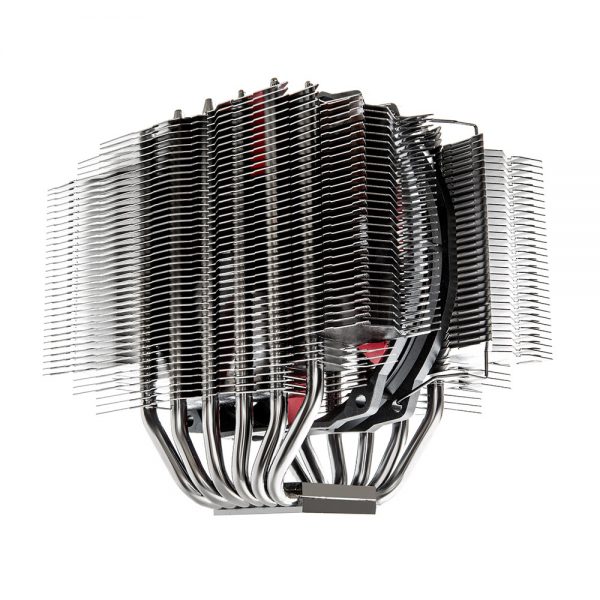 In the revised version of the Silver Arrow, the ITX-R is also compatible with the latest models of the ASUS M8I Motherboard powerful twin tower cooler also offers the possibility to find space in even smaller Mini-ITX systems and ensure an excellent cooling performance, thanks to the reduced height.

The twin tower design allows for a particularly large surface area and thus forms the basis for outstanding cooling performance of the Silver Arrow ITX-R. Due to the design of the fins, which has been adapted to fit perfectly to the included fan, the cooler offers especially at low fan speeds and low air flow rates an outstanding cooling performance.

The aluminum fins of the Silver Arrow ITX-R have been optimized to the specs of the Asus “Republic of Gamers” Mini-ITX motherboards. The design guarantees that incompatibilities to memory modules and VGA cards are excluded on these boards. The copper heatpipes and the mounting materials are black nickel plated as well.

As with all our high performance and quality coolers the Silver Arrow ITX-R makes use of the well-proven heat pipe technology. A total of six high-performance 6 mm heatpipes provide the most efficient dissipation of the generated processor heat. The heatpipes are tightly integrated into the copper base plate, which guarantees the most effective heat dissipation.

The base of the cooler features a slightly convex shaped support surface. The THERMALRIGHT® patent design, first developed by us several years ago and has been Years of Unique Historic Technology Compared to a variety of other manufacturer’s flat surfaces, this meticulous, the legendary convex shape tech further optimizes cooling performance – especially on Intel systems.

The included TY 129 fan is temperature controlled (PWM) – the fan speed varies (depending on the CPU temperature) between 300 and 1,300 rpm. The air flow of the for silent operation optimized fan varies between 21.9 and 94.8 m³/h, while generating a noise level of about 21 – 33 dB(A). This means, the fan will hardly be noticeable during standard operation. The fan features the mounting points of a conventional 120 mm fan and has a larger inner diameter than conventional 120 mm fans. The silent running fan is fitted securely to the heatsink with the included, revised fan brackets – adhesive anti-vibration pads allow for decoupled mounting.